As much as I have ranted over the first breadboards I used for my Brainfuck computer, the company behind them has tried to help. After I left a one-star review on Amazon, they admitted that their manufacturing quality varied and sent me new ones. They were indeed a bit better than the first ones in a few specific ways, so I bumped my review up to three stars.

Over time, the experience was more unpleasant than first impressions suggested. They couldn't compete with a few other cheap breadboards I've acquired over the years. I won't list my grievances again here, but I decided to go back to a one-star review.

Earlier this month they sent me an e-mail saying:

Sorry to disturb you again.

I read from your review that you were dissatisfied with our breadboard. We sincerely apologize for that and we took your comment very seriously. After strict tests, we have developed a new breadboard which is of better quality. We have sent out 3 new breadboards to your address via China Post which will take about 15-20 days to deliver . The tracking number is [REDACTED] and you can track it here: https://www.17track.net/en ^.^

We care very much about how you feel and your review means everything to us. So we’d really appreciate it if you could give us an update review based on the new breadboard and our service. ^.^

Once again I apologize for all the inconvenience caused in this case and I look forward to your reply. Thank you very much!!


The cynic in me thinks they mean "we found another supplier" when they say "we have developed", but I can't complain about the effort they're putting into making me a satisfied customer. I'm also a sucker for friendly emoji. :)

After bouncing back and forth between USPS facilities in San Francisco and Oakland for a week, they arrived a couple days ago. Whether the cynic in me turns out to be right or not, these new ones are vastly improved over the originals.

Two things are obvious at first glance: the plastic is much higher quality, both in look and feel, and the silk-screening is clearer. On closer inspection, there seems to be much more consistency in the way the contacts line up with the holes.

Here is a close up of the old board. You can see several areas where the contacts are directly under the holes. This would block entry of pins unless you put them in at an angle, which might go off to the side of the clip rather than into the center. 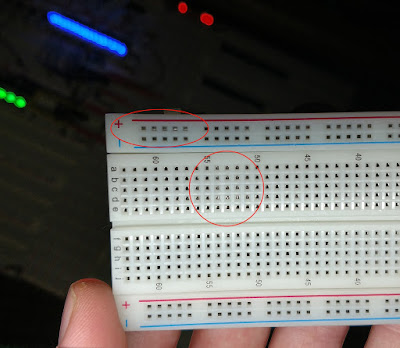 And here is one of the new ones for comparison: 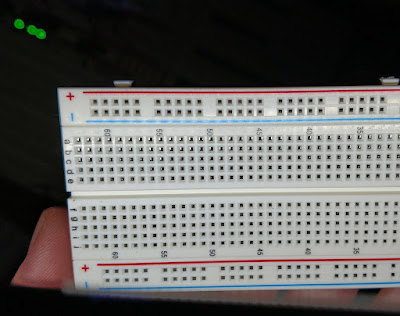 Combined, these two fixes should alleviate most of the problems I had with the old ones. Insertion of components with multiple pins is much less frustrating, and retention of components is much better. In particular, these new boards seem to hold onto my DIP and tactile switches just as well as the Jameco boards.

The new boards also lay much flatter. The old ones had a noticeable curve out of the box, so they would tend to stretch and strain when assembled into a large panel. Here's a video demonstrating the improvements in curvature. Note: I'm using the one old Elegoo board that remained completely intact (I didn't cut the power strip off) to give it the best chances.


To be fair, there are still some problems with consistency. One of the three boards I received has a power rail where one contact in each block of 5 holes is misaligned: 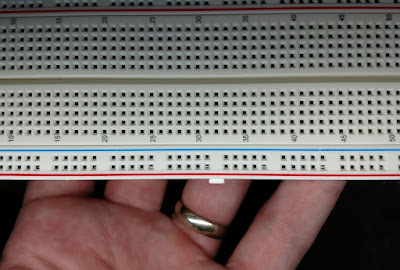 I have not yet done any serious testing of their electrical characteristics since I'm not planning to assemble these into another computer. The contacts don't feel quite as eager to grip as the Jameco ones, so your mileage may vary.

All in all, I'm actually quite glad to have these three new boards. I had been using some of the old ones for a couple side projects, and am eager to transfer them over.


All in all I'm happy with their performance. While the power connections feel a bit looser than the Jameco boards, the electrical contact seems pretty stable. The board has no problem handling an 8 MHz crystal clock with a 24 stage (6x4 bit counter) TTL frequency divider. There is virtually no noticeable effect on the clock outputs when I jiggle the power leads coming into or jumping across the board. I'm not sure how they'd behave in the bus strip/massive board configuration I'm using for the computer, but so far they look promising.
Posted by Cogwheel at 07:44